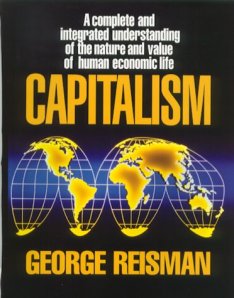 In my Reading Economics Project, I’ve completed the series of posts on Shawn Ritenour’s Principles of Economics and made fair progress on the Ludwig von Mises Institute’s Home Study Course. However, this is my very first post on George Reisman’s Self-Study Program. His treatise, Capitalism, has been staring down in rebuke at me from my top shelf, and I finally couldn’t bear it anymore. Thus I’m going to attempt a series of posts covering the works in his syllabus’s introductory unit in the near future.

Like the Mises Institute’s course, Reisman’s program begins with a sort of historical survey of economic thought. Painting with a broad brush, Reisman places all economists into two categories: “procapitalist” and “pseudocapitalist” (we must wait until Chapter 1 to reach Reisman’s definition of “capitalism”).

Although he acknowledges that the classical economists made significant errors in their value and price theory, he also thinks the Austrians have generally gone too far in rejecting classical positions: “A fundamental accomplishment of this book, which makes possible almost all of its other accomplishments, is the integration and harmonization of the ideas of the classical and Austrian economists” (emphasis in original). I figure this is going to be one of two major differences between what I read in this program as opposed to what’s in the Mises Institute’s program. The other major difference is that Reisman is an Objectivist, i.e. a follower of Ayn Rand’s philosophy, so there’s lots of Randian influence. Some of this influence gets signaled even in this section; for example, Reisman sees the businessman as the primary driver of the economy.

In the “pseudocapitalist” category, Reisman places just about everyone else: mercantilists, socialists, the German Historical and American Institutionalist schools, Marshallian neoclassical economists (including Keynesians), and mathematical economists. Reisman promises detailed rebuttals of these economists’ alleged errors in later chapters, although he has some choice words for the mathematical economists even here, particularly in his assertion that they attempt to form a “scholar’s guild” which “seeks to shut out all who do not first translate their thoughts into its esoteric language.”

Although this introduction runs a mere twelve pages (albeit pages with double columns and a small-sized font), Reisman packs many names and brief expositions of economic ideas into it. I have a feeling it’s going to read much like a systematic treatise from the Great Books of the Western World series.

I’m looking forward to getting further into this work, but there’s a lot to cover in the introductory unit of Reisman’s program even before we advance to Chapter One. Most significantly, there are two full volumes of the history of economic thought before we get there. Are you ready?

I am Professor of Humanities at Faulkner University, where I chair the Department of Humanities and direct online M.A. and Ph.D. programs based on the Great Books of Western Civilization. I am also Associate Editor of the Journal of Faith and the Academy and a member of the faculty at Liberty Classroom.
View all posts by Dr. J →
This entry was posted in Books, Economics and tagged Austrian economics, Ayn Rand, capitalism, classical economists, George Reisman, Ludwig von Mises Institute, Shawn Ritenour. Bookmark the permalink.