Reading the Great Books: Two Years Down, Five to Go

It’s that time at the beginning of the new year to take a look back and evaluate the progress on this project I keep harping on of reading the Great Books. If you’ve been following along to any extent whatsoever, you’ll be interested in a few figures I’ve compiled. 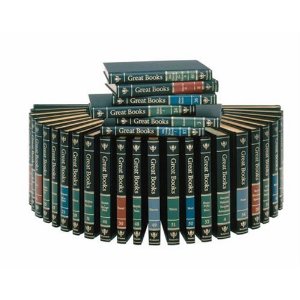 Our goal has been to read the Gateway to the Great Books (10 volumes) and Great Books of the Western World (60 volumes). Volume 1 of GGB and Volumes 1-2 of GBWW consist primarily of index material and topical essays; we read the 100-page introductory essay in Volume 1 of GGB the first week of 2011. That left us with 67 volumes of great works to devour.

Of those 67 volumes, we have had readings from 41 so far: all nine GGB volumes and 32 of the GBWW volumes. We have read five volumes in their entirety: GGB Volumes 6 (Man and Society) and 10 (Philosophical Essays); and GBWW Volumes 3 (Homer), 5 (Herodotus/Thucydides), and 48 (Melville/Twain). At this point last year we had completed two volumes. As we continue the program, of course, the number of volumes we complete will increase each year as we polish off volumes of collected works we began in previous years. As of now I count four volumes in the GGB series that we’re within one or two readings of finishing.

In 2011-2012, we read 3,291 pages classified as Imaginative Literature. This total included four epic poems, four complete novels (with a fifth begun), excerpts from three other novels, three novellas, twenty-four short stories, and fifteen critical essays. If I had to pick a favorite from the 2012 readings in this category, I’d probably go with Paradise Lost or the Aeneid. My least favorite was probably the excerpt from Butler’s Erewhon.

Most challenging for me have been the 2,332 pages of science and mathematics. This total included thirteen treatises (with another in progress), one autobiography, two biography excerpts, one complete work of popular science, excerpts from seventeen others, two series of lectures, thirteen other essays and lectures, and the Hippocratic Oath. Favorite from 2012: Einstein and Infeld’s The Evolution of Physics. Least favorite: hard to say, but probably Russell’s essays, just because I found his condescending tone so irritating.

Last but certainly not least, we have read 2,880 pages of Philosophy and Theology in 2011-2012. This total included fifteen complete treatises (with two others begun), excerpts from three others, a spiritual autobiography, thirteen short works (such as Platonic dialogues), three letters, three lectures, and about fifteen essays of varying lengths. Favorite from 2012: St. Augustine’s City of God. Least favorite: the impenetrable Critique of Pure Reason.

All in all, we have read 11,236 pages from the 41 volumes. What were your favorite selections from 2012? Post them in the comment section below.

Keeping this pace of reading going week after week has certainly been a challenge, but we have proven that it is a realistic goal. That 110 pages per week adds up after a while, and the totals will only get more impressive over time. I hope you made a New Year’s Resolution to continue with this program, or to start it if you haven’t already.

I am Professor of Humanities at Faulkner University, where I chair the Department of Humanities and direct online M.A. and Ph.D. programs based on the Great Books of Western Civilization. I am also Associate Editor of the Journal of Faith and the Academy and a member of the faculty at Liberty Classroom.
View all posts by Dr. J →
This entry was posted in Books, Liberal Arts and tagged Great Books. Bookmark the permalink.

5 Responses to Reading the Great Books: Two Years Down, Five to Go