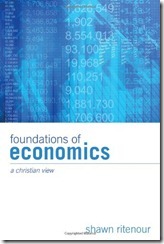 The final chapter of Shawn Ritenour’s Foundations of Economics marks a return to the emphasis on theology found in the first chapter. Here the focus is on the cultural mandate of Genesis 1, where God creates Adam and Eve and commands them to “be fruitful and multiply; fill the earth and subdue it.”

Ritenour argues that economics provides indispensable knowledge of how to fulfill that mandate. Most of the remainder of the chapter builds a case that, in addition to protecting private property (discussed in earlier chapters), mankind must develop three things:

The division of labor is limited by the extent of the market to which participants have access. Markets expand as population grows. Thus, contrary to many policymakers and environmentalists, Ritenour argues that, in general, population growth is a good thing. Individuals, communities, and nations discover their comparative advantages in the market economy and increase their productivity as they specialize. Treating nature as museum of which we are the curators is a wrongheaded approach to the creation, because the cultural mandate includes the idea of taming the wilderness and causing it to serve human ends under God.

To sustain a growing population in a context of finite resources, we must have economic development, and this requires capital accumulation, which in turn requires a relatively low time preference. Noting that the only two ways for a society to accumulate capital is to do it themselves (a slow and laborious process) or take advantage of capital accumulated by others, he makes a plug for foreign investment in which private entities in developed countries purchase stock or bonds from private enterprises in developing countries. Ritenour specifically excludes government-to-government foreign aid as a legitimate means of promoting development, as it is determined by politics rather than markets and rarely achieves its stated objectives.

Capital accumulation is not sufficient for economic development because capital must be allocated effectively by entrepreneurs for growth to occur, and thus the third ingredient of Ritenour’s recipe for the fulfilling of the cultural mandate is entrepreneurship. Here again the importance of private property is highlighted, because entrepreneurs must have market prices in order to make rational calculations of profit and loss.

The last few pages focuses on connections between religious beliefs (specifically Christianity), the culture they produce, and economic progress. Ritenour proposes that a Christian ethic is in harmony with the laws of economics and tends to produce economic growth as it is more and more fully put into practice. On the other hand beliefs and practices contrary to Christian teaching–“a lack of personal initiative, a platonic disinterest in material creation, a lack of personal responsibility, a high preference for leisure, an acceptance of determinism, the fear of change, belief in the occult, pantheism, and a mystical view of nature”–tend to produce economic stagnation or regression.

Free markets are a necessary but not a sufficient condition for robust economic growth; they will lead to results only as good as the character of the people participating in them. Thus Christianity’s influence is needed as well for the fulfilling of the cultural mandate. The Church must act to care for those in need, and Christians must work through persuasion and example to bring about market outcomes in accordance with Christian teaching.

This is the final post in my series on Foundations of Economics: A Christian View. You may view a list of all the posts on my Reading Economics Post Index page.

If you are in the Nashville, TN, area and would like to attend a conference session focusing on this book, consider coming to the Christian Scholars Conference at Lipscomb University this weekend. I’ll be convening a panel of respondents to this work, and the author will be on hand to respond to their responses at 9:00 a.m. Friday.

I am Professor of Humanities at Faulkner University, where I chair the Department of Humanities and direct online M.A. and Ph.D. programs based on the Great Books of Western Civilization. I am also Associate Editor of the Journal of Faith and the Academy and a member of the faculty at Liberty Classroom.
View all posts by Dr. J →
This entry was posted in Books, Economics and tagged calculation problem, capital accumulation, division of labor, entrepreneurship, Foundations of Economics, Shawn Ritenour. Bookmark the permalink.