Having just completed the reading of Moby Dick last week, I thought I’d comment on an analogy that occurred to me more than once while working my way through it.

So what does Ahab do? He dissembles and manages to get command of a whaling ship under false pretenses. In Nantucket, he conceals his monomania and puts himself forward as an appropriate commander for the Pequod. No one, not even his first mate, Starbuck, knows his true purpose. However, once the voyage is underway and civilization has been left far behind, the mask comes off.

In Chapter 36, “The Quarter-Deck,” Ahab offers a one-ounce gold coin to the first crewman to sight the white whale, acknowledges to Starbuck that this is the same whale who took off his leg, and then declares,

Aye, aye! and I’ll chase him round Good Hope, and round the Horn, and round the Norway Maelstrom, and round perdition’s flames before I give him up. And this is what ye have shipped for, men! to chase that white whale on both sides of land, and over all sides of the earth, till he spouts black blood and rolls fin out.

Most of the crewmen, caught up in Ahab’s frenzy, readily swear to commit themselves to hunting Moby Dick, but Starbuck knows this is folly and, more importantly, a breach of the crew’s fiduciary duty to the Pequod‘s owners:

I am game for his crooked jaw, and for the jaws of Death too, Captain Ahab, if it fairly comes in the way of the business we follow; but I came here to hunt whales, not my commander’s vengeance. How many barrels will thy vengeance yield thee even if thou gettest it, Captain Ahab? it will not fetch thee much in our Nantucket market.

In that scene, Ahab pressures Starbuck into going along with his plan reluctantly. However, in Chapter 109, “Ahab and Starbuck in the Cabin,” the divergent aims of the ship’s owners and Ahab are highlighted even more explicitly. When the Pequod begins to leak oil from somewhere in the hold, Starbuck reports to Ahab that they must “up Burtons and break out,” i.e. pull the casks of whale oil that had been harvested up out of the hold and examine them to discover the source of the leak. This is a time-consuming process during which the hunting must cease. At first Ahab rejects the notion that they should stop for a week to “tinker a parcel of old hoops.”

Starbuck replies that if they don’t do just that, they would “waste in one day more oil than we may make good in a year. What we come twenty thousand miles to get is worth saving, sir.”

Starbuck: I was speaking of the oil in the hold, sir.

Ahab: And I was not speaking or thinking of that at all. Begone! Let it leak!

After some more haranguing by Ahab, Starbuck then says, “What will the owners say, sir?”

Ahab’s reply is the clearest possible statement of disregard for the rights of the owners of the property he has decided to use for his own vendetta:

Let the owners stand on Nantucket beach and outyell the Typhoons. What care Ahab? Owners, owners? Thou art always prating to me, Starbuck, about those miserly owners, as if the owners were my conscience. But look ye, the only real owner of anything is its commander; and hark ye, my conscience is in this ship’s keel.–On deck!

When Starbuck persists, Ahab levels a pistol at him and threatens to kill him. Starbuck says, “Let Ahab beware of Ahab; beware of thyself, old man,” before departing.

This remark actually gets through to Ahab, who ultimately orders the heaving to for the inspection of the casks. But the cure doesn’t last, for by the end of the novel, with a hold full of whale oil and a fair wind to blow the Pequod home, Ahab receives word of Moby Dick and once more rejects his fiduciary duty to the ship’s owners to seek revenge. The result, of course, is the destruction of the ship with the loss of nearly all hands and cargo. The narrator ends the tale there, but remember that back in Nantucket we were told that the maintenance of widows and orphans depended in part on the success of the Pequod‘s voyage. Ahab’s monomania damaged others besides his crew. 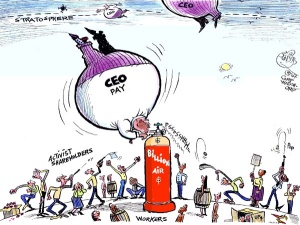 By this point, I hope the analogy between Ahab and a corrupt corporate CEO should be pretty apparent. We’ve heard a number of stories over the last few years of corporate officers who have abused the fiduciary trust placed in them by shareholders in order to feather their own nests or to pursue pet causes or agendas. Some of these stories result in the destruction of their companies, employee job losses, and shareholder impoverishment (while in graduate school, I met a lady whose entire retirement fund had been in Worldcom stock). In other cases, the shareholders are simply consigned to subpar returns on their investments while the directors use corporate funds to throw lavish parties and otherwise enjoy themselves.

So the next time you read about a corporate officer caught misusing company funds or harming his shareholders in some other way, just picture Captain Ahab in your mind, and you won’t be that far wrong.

I am Professor of Humanities at Faulkner University, where I chair the Department of Humanities and direct online M.A. and Ph.D. programs based on the Great Books of Western Civilization. I am also Associate Editor of the Journal of Faith and the Academy and a member of the faculty at Liberty Classroom.
View all posts by Dr. J →
This entry was posted in Books, Current Events and tagged Captain Ahab, corruption, Great Books, Herman Melville, Moby Dick. Bookmark the permalink.

1 Response to Captain Ahab as a Corrupt Corporate CEO