The Welfare State: A Sinking Ship

Washington Post columnist Robert Samuelson has laid out some uncomfortable facts that need to sink in with our policymakers before they do anything else stupid. 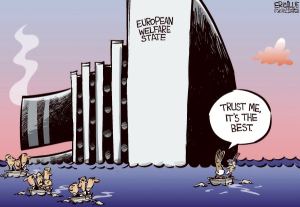 In “The Welfare State’s Reckoning,” Samuelson points out that Americans who are currently scoffing at the Europeans and their currency crisis are fooling themselves if they think we’re not in the same boat as our friends across the pond. Although the American welfare state isn’t quite as comprehensive or ossified as its European counterparts, it faces the same critical challenges:

A couple of relevant facts Samuelson does not point out:

To anyone paying attention, the evidence is increasingly clear that the parasite is on the verge of killing the host. Meanwhile, we’re being treated to the spectacle of Congress and the president scrambling around in an attempt to avoid actually cutting anything between now and the end of the year. They’ll play Santa Claus as long as they possibly can.

I am Professor of Humanities at Faulkner University, where I chair the Department of Humanities and direct online M.A. and Ph.D. programs based on the Great Books of Western Civilization. I am also Associate Editor of the Journal of Faith and the Academy and a member of the faculty at Liberty Classroom.
View all posts by Dr. J →
This entry was posted in Current Events and tagged Congress, debt, economics, Medicare, Robert Samuelson, Social Security, Tom Woods, welfare state. Bookmark the permalink.