If I had to come up with a list of the absolute worst events in the history of Western Civilization, World War I would have to be near the top of the list. It was a war that accomplished practically nothing while killing more than ten million people and greatly diminishing the absolute and relative position of the European powers. Oh, and it gave us the Soviet Union and fascism, too, not to mention Iraq.

So if you want to understand the extent to which the world is screwed up today, you have to know something about World War I. Unfortunately, most Americans know practically nothing about it, not even that Veterans Day is based on the 1918 armistice. And now our last living link to the conflict is gone. 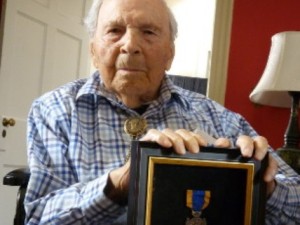 Frank Buckles, 110, passed away over the weekend in Charles Town, WV. He lied about his age to get a military recruiter to let him enlist in 1917, and then spent most of the war in England and France as a driver and warehouse clerk. After the armistice, he helped repatriate German prisoners and eventually returned to the U.S. in 1920.

His adventures didn’t end there, though; he also ended up as a civilian POW in the Philippines during World War II. After that war, he settled in West Virginia, where he lived for the rest of his life.

If you’re not up to scratch on WWI knowledge, pay respect to Frank Buckles’s memory by reading The Guns of August, Barbara Tuchman’s bestselling account of the opening weeks of the war. Or if you’re too busy to read a book, try watching Gary Cooper play one of the most celebrated American soldiers of the war in Sergeant York.

I am Professor of Humanities at Faulkner University, where I chair the Department of Humanities and direct online M.A. and Ph.D. programs based on the Great Books of Western Civilization. I am also Associate Editor of the Journal of Faith and the Academy and a member of the faculty at Liberty Classroom.
View all posts by Dr. J →
This entry was posted in Current Events and tagged World War I. Bookmark the permalink.